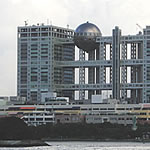 Odaiba お台場 is a man made island-like district in the Tokyo harbour, mostly developed as a tourist destination. Odaiba was an isolated industrial park before being transformed into a very modern, almost futuristic type of theme park. From the incredible appearance of Tokyo Big Sight to the Telecom Center, there are many attractions include the Palette Town, DiverCity Tokyo Plaza and Oedo Onsen Monogatari, a traditional Japanese Onsen theme park.

The below is a list of attractions at Odaiba…many places to see, and you really cannot see everything in one day. Plan to come many times as it is a nice change from downtown Tokyo. 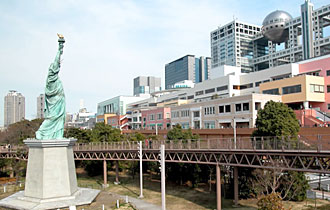 To get to Odaiba, there are several methods of transportation available.

By the monorail Yurikamome
http://www.yurikamome.co.jp/en/
The Yurikamome starts from the Shinbashi station and travels over the Rainbow Bridge reaching the Odaiba, across the Tokyo Bay.. The view from Yurikamome going over Rainbow Bridge is very beautiful on a sunny day. However, Yurikamome line is usually crowded, especially on weekends and the fare is rather expensive. Besides, if the train is too crowded, you won't enjoy the view much, unfortunately.

By the Rinkai Line
http://www.twr.co.jp/

By the Toei Bus

Take a Toei bus (Tokyo bus) going to Odaiba. It takes more time than Yurikamome Line, though, it is not so crowded and the fare is much cheaper: only 210 Yen. In addition, you can take other buses too if you buy a one day ticket that is 500 yen.

There are bus terminals in front of the Yaesu South Exit and the Marunouchi Exits of JR Tokyo Station. You can take the bus bound for Tokyo Big sight. It takes 35 to 45 minutes to go the Tokyo Big Sight convention center. The bus doesn't go over Rainbow bridge, instead, it reaches Odaiba by crossing a few tiny bridges.