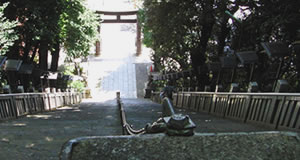 Atagoyama, or Mt. Atago is a small mountain located in the heart of Tokyo, near the Tokyo Tower and Toranomon Hills building. On the top of the mountain is the Atago-jinja shrine with a history of over 400 years, nestled among trees and surrounded by high-rise modern buildings. The approach leading to the shrine is called “The Stone Stairway of Success”, known for its steepness being almost challenging to climb up and down.

Though Atagoyama is hardly recognized as a mountain while being situated in hills and hidden by large buildings, Atagoyama used to be a scenic place and visitors were able to overlook the sea from up there a long time ago. 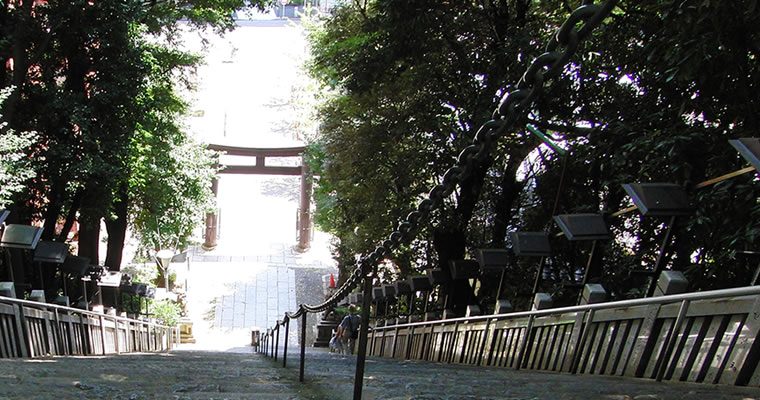 The Stone Stairway of Success

The approach leading from the mountain foot of Atagoyama to the Atago-jinja shrine standing on the top is a steep stone stairway. With a slope angle of 37 degrees, the stairway makes visitors overwhelmed when they look up or down. This stone stairway is called “The Stone Stairway of Success”, Shusse-no-kaidan in Japanese, literally means “the stone stairway for achieving a successful career”, derives from an old story;

One day, a Samurai general (Shogun Tokugawa Iemitsu) and his party came by Atagoyama, and the general ordered to climb up the stairway on horseback and get a plum flower on the top of Atagoyama. It was risky. If fail, the stairway to Atago-jinja would turn out to be the stairway to heaven. Everybody in the party was afraid of the challenge, but one samurai (Magaki Heikuro) bravely did and succeeded. The general praised the samurai, and the samurai became famous as the best man of horse riding in Japan.

As it is so tough even to walk up the stairways, this hard-to-believe story had been taken just as a legend. In recent year, other person challenged to find out if it was practically feasible. Amazingly, that person on horseback successfully climbed up the stairway and the video showed it on a TV program. Since then, the legend is known as a real story.

Atago-jinja Shrine on the top of Atagoyama is a peaceful place, has a little pond with Nishikigoi (colorful carp). The NHK Museum of Broadcasting (Admission is free) is just next to the shrine. Why not drop by Atagoyama when you are nearby. 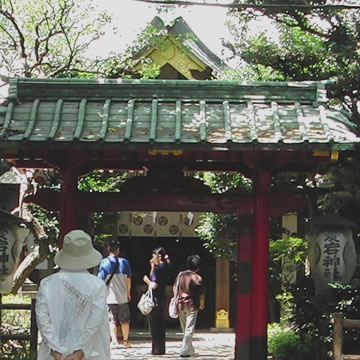 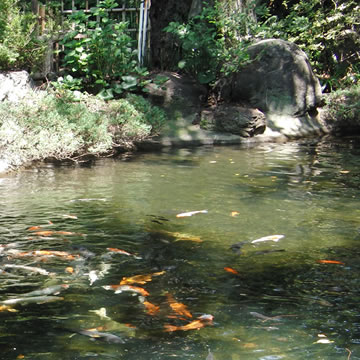 Tips
Atagoyama is a greenery place, beautiful with young leaves in spring, colorful leaves in autumn. It may be better to watch out for mosquitoes in summer.

At Atago-jinja wedding ceremony can be held. Famous actors have had weddings.

Extra info : What is Atago?
Atago Shrine (=Atago-jinja Shrine) is to enshrine the god of fire-safety. There are many shrines called Atago-jinja throughout Japan, and the head of Atago-jinja shrine is in Kyoto. Mt. Atago (=Atagoyama) is deeply engaged with Atago-jinja and there are also many mountains called Atagoyama. 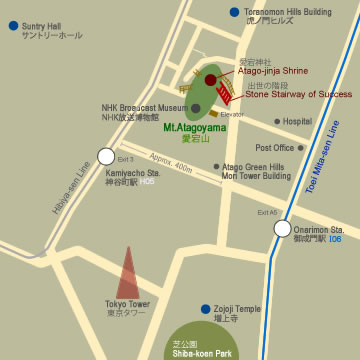 The nearest train station is Kamiyacho on the Hibiya Subway Line. From Kamiyacho station (Exit 3) to Atagoyama it takes about 5 to 10 minutes on foot depending on which stairways you take. Atagoyama actually has several stairways leading to the top. The quickest way is to take the stairway behind the Atagoyama, beside the exit of the tunnel (for vehicles) and it would be a 5-min walk. If you want to walk up the Stone Stairway of Success, you are to take a bit longer way, it would be about a 10-minute walk.

For those who want to avoid the steep stairway, there is a gentle stairway on the right side of the Stone Stairway of Success. On the left side near the tunnel, there is an elevator.

Around 22 to 24 of September
The highlight of the festival is the climbing down/up of the Stone Stairway of Success while carrying the Mikoshi (portable shrine) in a group. The stairway climbing is held once every two years.