Nanohana, another spring flower beloved by locals in Japan 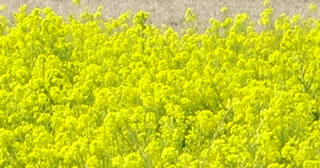 Canola Flower or Nanohana 菜の花 is the flower that Japanese people often associate with a spring landscape on the countryside of Japan. The view of Nanohana fields, surrounded by small mountains, is beloved by locals as it makes a warm feeling and the charm differs from it in Sakura cherry blossoms which gloriously bloom in town.

In Tokyo and the nearby areas including Chiba and Kanagawa prefecture, the Nanohana bloom is at its best from the middle of March to early April. The Boso Peninsula in Chiba Prefecture has some Nanohana viewing spots and the area along the Kominato-sen Line and Isumi-sen Line is a unique place where you can enjoy viewing Nanohana on the train. 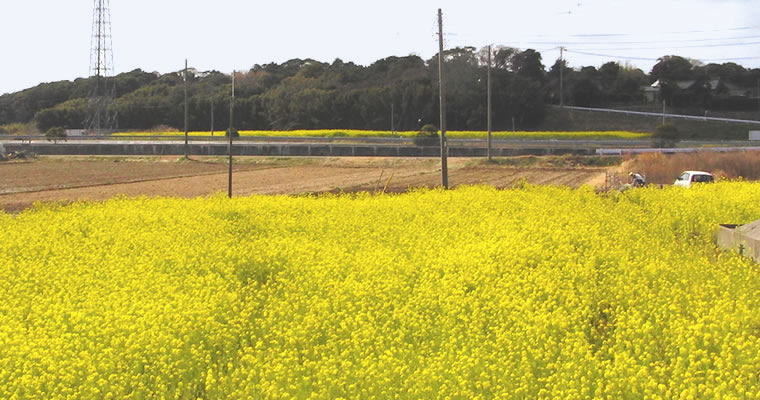 The Kominato-sen Line is a local railway about 39km in length, located in the middle of Boso Peninsula in Chiba Prefecture. Though the location is not so far from Tokyo, it still retains a serene, peaceful landscape of the countryside. The little train slowly runs between small stations, in nostalgic sceneries.

The train runs between Goi Station五井駅 and Kazusa Nakano Station上総中野駅 in about one hour. The favorite viewing spots are between Satomi Station里見駅 and Youro-keikoku (Yoro Valley) 養老渓谷駅. In 30 minutes after departing from Goi Station, you will see Nanohana fields outside of the train window.

From Kazusa Ushiku Station上総牛久駅, seven stops away from Goi Station (about a 30-min ride), the tourist train Torokko Tetsudo is served. (With extra fee. Prior ticket purchase is required). The kawaii train runs along the railroad fringed with the yellow flowers.

Isumi-sen Line is a 27km-long local railway connected with the Kominato-sen Line. Isumi-sen has a bunch of both Nanohana and Sakura viewing spots along the railroad. Nanohana flowers and Sakura cherry blossoms fringe along the railway where the soothing scenery enchants the passengers.

From Kazusa Nakano Station the Isumi-sen train is connected to the Kominato-sen train, so it allows to ride through viewing spots on the train from Goi Station to Oohara Station.

From JR Chiba Station千葉駅to Oohara Station大原駅 (at low fare).
(In the case of getting on the Isumi-sen train from Oohara)
From Chiba Station 千葉駅 take a train on the JR Sotobo-sen Line 外房線 bound for Awa-Kamogawa 安房鴨川 to get to Oohara Station 大原駅.
(Travel time 1 hour 10 min Fare 972JPY/ one way)

Tips
- From Oohra Station to Kazusa Nakano Station, the fare is 720JPY/one way.

This article is also available in Japanese