Planning a travel to Kamakura 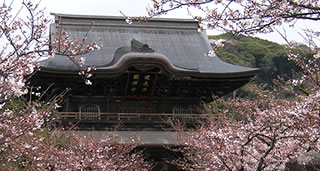 Kamakura 鎌倉 is an ancient city located in the Kanagawa prefecture, roughly 50 KM southwest of Tokyo, in the Kanto Region. Kamakura is situated along the coast of Sagami Bay and surrounded by mountains and was a natural fortress-city in Japan's early history.

Kamakura is a historic town created by Samurai

In Japan's Heian period, Kamakura was a major city. From the 12th to the 14th century the Minamoto shoguns ruled this region, known as the Kamakura Shogunate. Much of the architecture of the surrounding area reflects this ruling class. Kamakura has some 100 temples and historic places having the atmosphere similar to Kyoto, which is considered the spiritual capital of Japan. There is an area in Kamakura called Kitakamakura, just one train station from Kamakura, and is close to Shonan and the Enoshima area. Since Kamakura is a coastal city, there are many fine beaches to visit too. 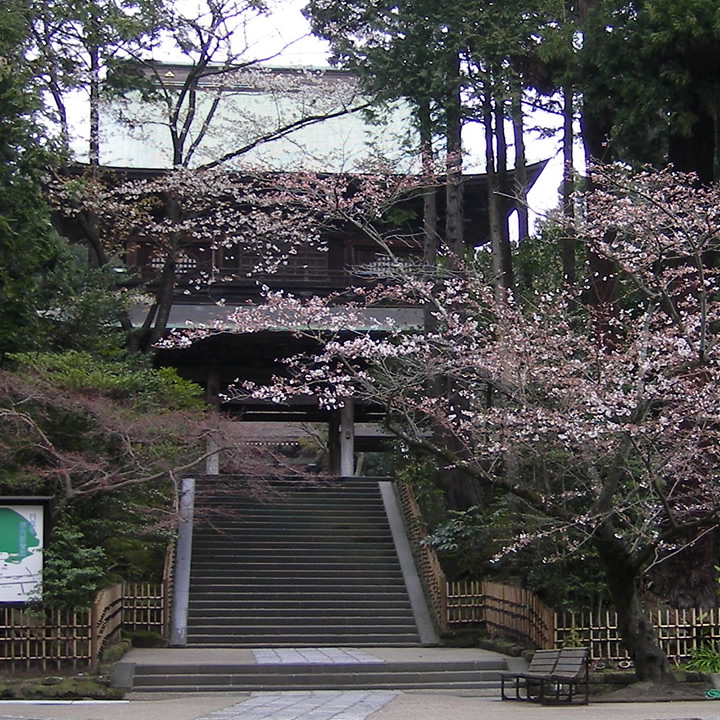 Kamakura is a historic town studded with many temples, mostly nestled in a forest on the hillside.. 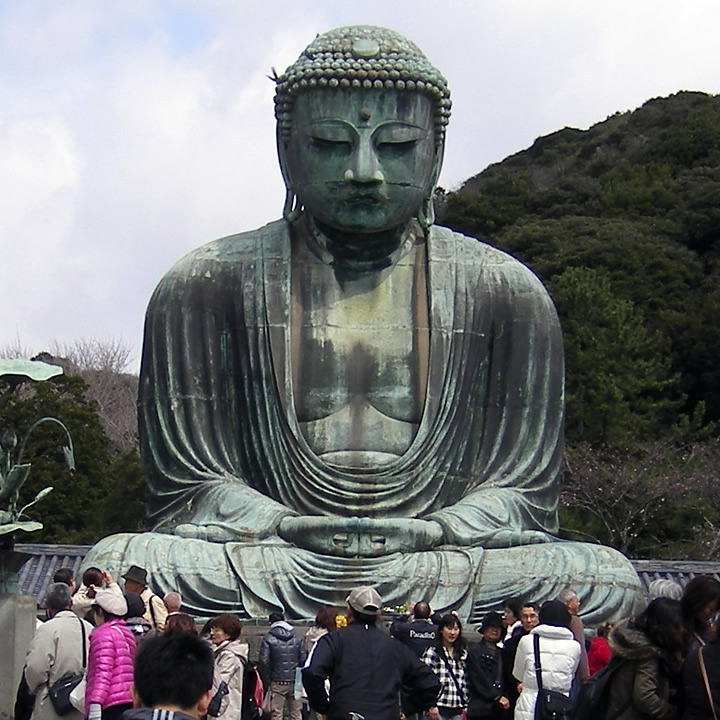 The great Buddha at Kotokuin Temple is the feature of Kamakura.

Getting around Kamakura on a one day trip

The historic district of the Kamakura City lies in the former fortress surrounded by small mountains, and the center is Tsurugaoka Hachimangu Shrine indicated as area A in the map, the most famous sightseeing spot in Kamakura. Tourists commonly visit this must-see shrine and go to see some other attractions there, mostly located in area B, C, and D. 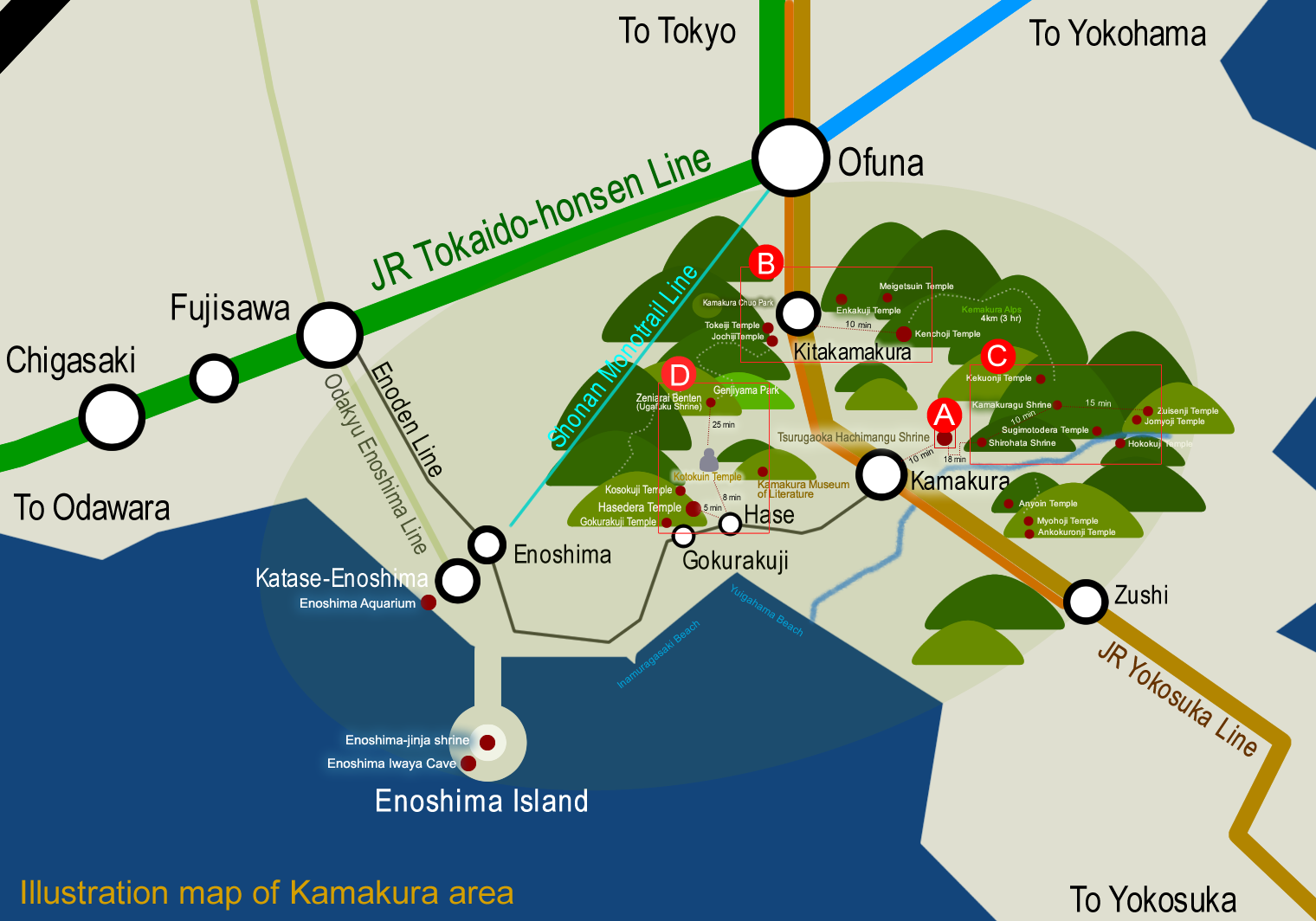 While the most attractions in the historic district are found within walking distance from one of the train stations there, reachable with a 5 to 15-minute walk, it is difficult to tour around to see all just in one day. Those sightseeing spots are scattered in different areas, besides, often located on a hillside. If you plan a one day trip to Kamakura, it is suggested that you select an area B or C or D + A to visit, depending on your preference.

Most first-time tourists coming to Kamakura commonly visit Tsurugaoka Hachimangu Shrine and Great Buddha in Kotokuji Temple, the two of the must-see spots which are always crowded with tourists.

Tsurugaoka Hachimangu 鶴岡八幡宮
A very important, historical-cultural center of Kamakura, the place symbolizes Kamakura.
Tsurugaoka Hachimangu Shrine is about 10 minutes walk from JR Kamakura Station. On the way to the shrine from Kamakura Station, there is Komachi-Dori, a lively street having many shops, cafes, and restaurants where people enjoy strolling and looking for something good to eat.
http://www.tsurugaoka-hachimangu.jp/

Koutokuin (Great Buddha) 高徳院
This temple is famous for Daibutsu, a huge statue of Buddha. Fall could be the best time to visit because then you can see trees aflame with red's and yellow's.

Great Buddha is located in the west of the historic district (in area D), about 8 minutes on foot from Hase Station on the Enoden Line.
http://www.kotoku-in.jp/

It is walkable between Tsurugaoka Hachimangu Shrine and Kotokuin Temple (Great Buddha), but it will take 40 minutes or more. There are two routes between the shrine and temple, and the one is to go down the road along the Enoden Line, a street-car-like small train running on the coastline. The other is the way going through hilly places which may look shorter on the map but full of ups and downs.

Tranquil, meditative places that still retain an air of old Kamakura are mostly found in the east area (area C). This area has temples with atmosphere, nestled off the beaten path.

Zuisenji 瑞泉寺
A historic temple with a garden created at the rock creep. This temple is also known for seasonal flowers.
http://www.kamakura-zuisenji.or.jp/(Japanese website)

Kamakura has hiking trails in the surrounding mountains. The starting points are near Kitakamakura Station in the north of the historic district. (area B)

The trail on the mountain range called Kamakura Alps begins from the Kenchoji Temple (Admission fee 300 JPY), has a long stone stairways leading to the starting point.
Although the mountains in Kamakura Alps are small and the altitude is about 160m at the highest, the 3-hour-long hiking there will be more challenging than expected. Remember that Kamakura was a natural fortress and the bushy mountains were for defending enemy attacks. The trails in the mountains are narrow and steep, besides, people can easily lose their ways. The rocks on the trails are so slippery that the hikers should be well prepared.

The route begins near Jochiji Temple, heading to Genjiyama Park., has a walking path and easier to walk than the route on Kamakura Alps. The other walking path beginning from Genjiyama Park leads to the place near Great Buddha, that will be a 2-hour walk in total from Kitakamakura Station.

Kenchouji 建長寺 (Kitakamakura)
This is the very first temple for Zen meditation in Japan and was constructed in 1253. There are seven Juniper trees over 750 years old. The stone stairway behind the temple has many statues of Tengu monster.
http://www.kenchoji.com/ (Japanese website)

Other attractions in the histric district of Kamakura

Zeniaraibenten Ugafu Shrine (銭洗弁天 (area D)
People wash their money with spring water in a cave at this shrine for a charm to be rich. 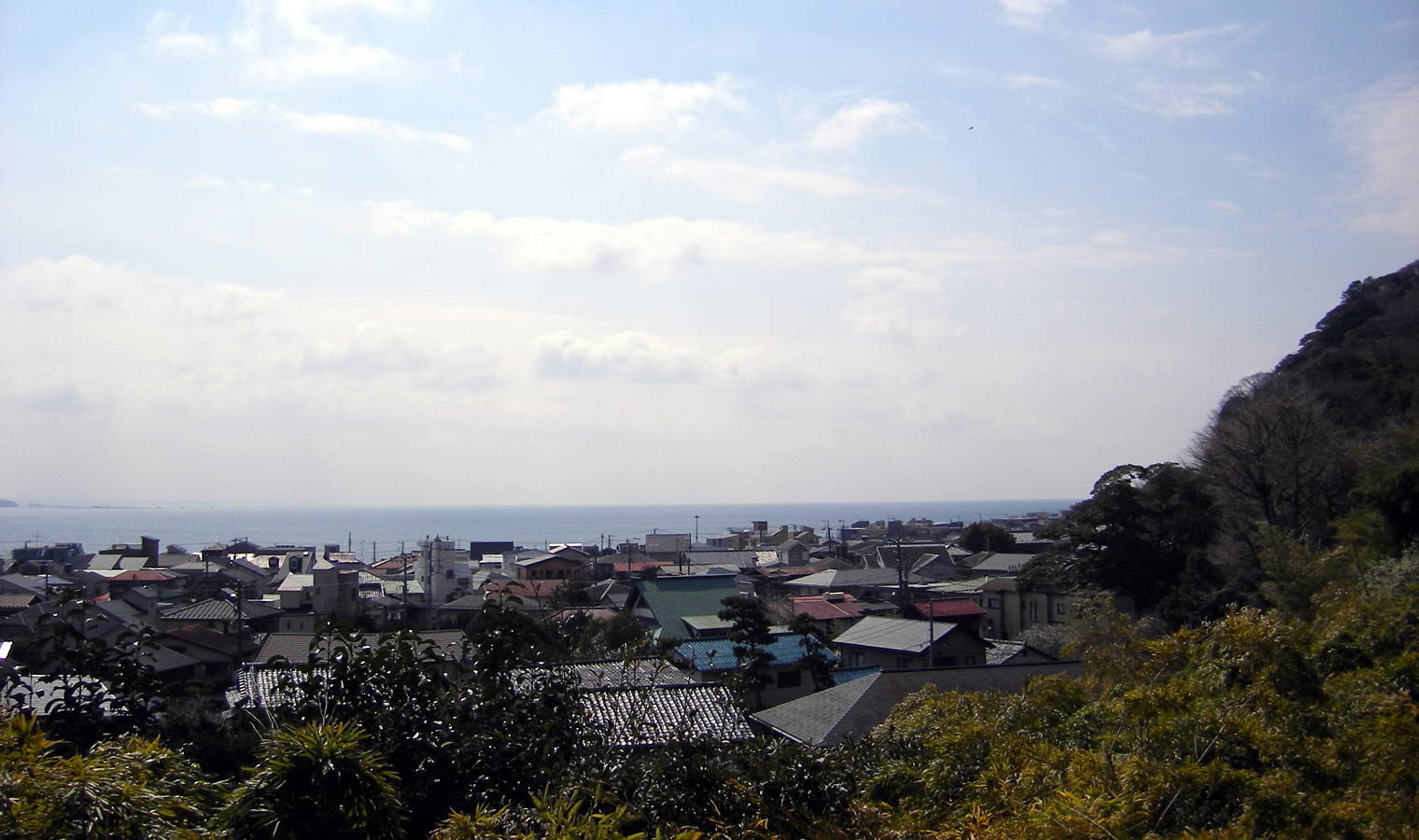 A view of Sagami Bay from Hasedera Temple, Kamakura, Japan

Kamakura Museum of Literature (Kamakura Bungakukan) 鎌倉文学館
The museum stands on a hill with majestic views out over the Sagami Bay. This museum is formerly a villa owned by a noble family and known for its splendid rose garden.
http://www.kamakurabungaku.com/(Japanese website)

Enoshima 江ノ島 http://www.s-n-p.jp/enosima.htm
Enosshima is another attraction in the Kamakura area, popular among people who like to enjoy the nostalgic atmosphere on the island and a stylish seaside resort along the beach. It is about 25 minutes by the Enoden train between Kamakura Station and Enoshima Station.

From Yokohama Station to Kamakura Station
Take a train on the JR Line(Yokosuka-sen Line or Shona-Shinjuku Line).Travel time is about 24 minutes. 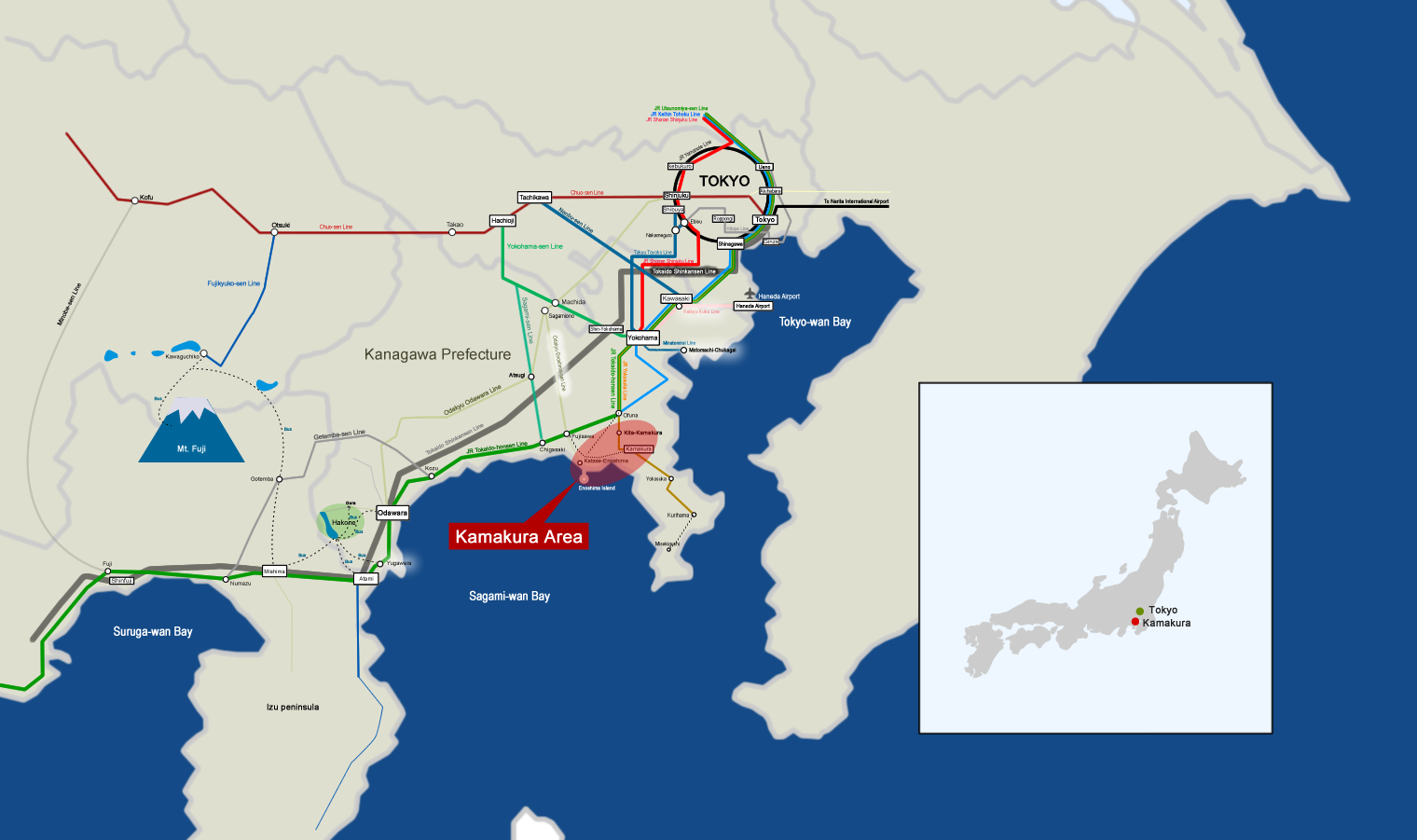