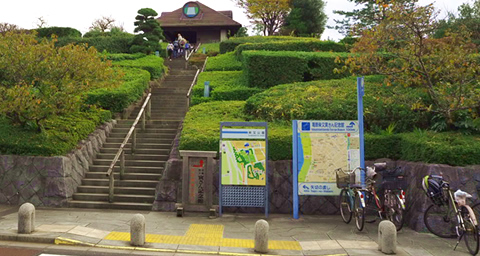 Go for a bike ride in the northern Tokyo area. The Edogawa Cycling Road in the Misato City area is a great place to enjoy a short ride. In spring, the riverside will be a field of Nanohana flowers tinged with yellow.

The Edogawa Cycling Road is a cycling course on the riverside of the Edogawa River. The river begins in southern Ibaraki and runs through Saitama prefecture and the eastern Tokyo area, toward Tokyo Bay, almost 60km long. The Edogawa Cycling Road is there on a 37.7km-long road between Satte city and Misato of Saitama prefecture. The cycling road follows a greenery riverbank where people enjoy football, baseball, mini-golf, bird-watching, jogging and cycling.

This cycling road actually has a hard-to-remember official name that is "Saitamakendo 156-Go Misato-Satte Jitenshado (埼玉県道156号三郷幸手自転車道線)", or "Bicycle road No.156 between Misato and Satte in Saitama Prefecture", but we call it just "Edogawa Cycling Road." for short and often include the further part of the road leading to Shibamata in Tokyo.

If you want to relax and enjoy a short ride, the route between Misato and Shibamata area is a suggestion. The 13km road is well paved and flat, suitable even for mamachari (utility bicycle) riders. You can start a ride at the point near JR Misato Station or Shibamata. Bike rentals are available at both starting points.

Misato is a city in the eastern part of Saitama prefecture, with easy access from Akihabara and Asakusa by the Tsukuba Express train. Although Misato used to be farmland with rice paddies lying between the rivers, it has transformed into a modern residential area, has large shopping centres; Costco. IKEA, Ito Yokado, VIVA HOME,and Lalaport. Misato is not the kind of place to visit for sightseeing, but it will be refreshing to bike around as Misato still have many fields in a country setting. Misato also has flower viewing spots. Misato Koen Park in southern Misato is famous for Sakura viewing. The yellow flowers at the riverbank reachable from Misato Station is a must-see attraction in spring. A bike rental is available near the North Exit of JR Misato Station (Rental fees: 300yen/time, 920yen/tourist.. ID required)

Shibamata is an old town remaining a nostalgic, warm atmosphere, known as the location of "Otoko wa Tsurai yo ", the series of comical-but-touching movies. Being a popular tourist spot, Shibamata has a tourist information office, which is located near Taishakuten temple and Yamamoto-tei Residence. A bike rental service is available at Torasan Memorial Museum (on the 2nd floor. Rental fee: 400yen/time). A rest point on your ride can be Mizumoto Koen Park, about 3km away from Shibamata. Mizumoto Koen Park is the largest park in Tokyo, known for sakura viewing, bird watching, urban forest walking, and cycling. 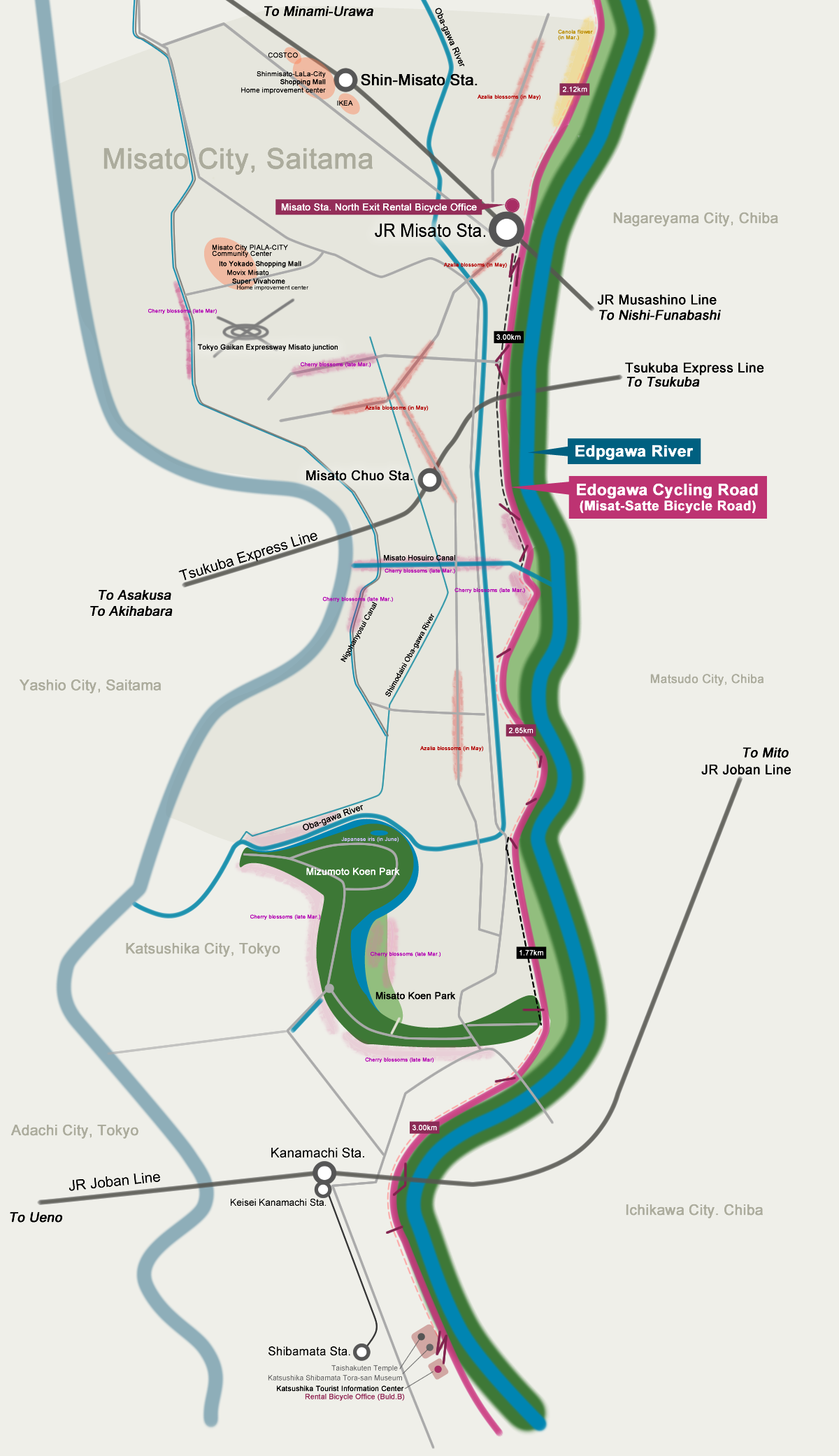