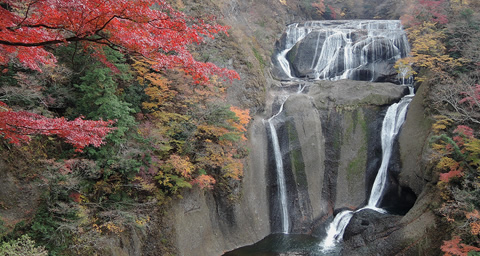 The Fukuroda Falls or Fukuroda-no-taki attracts visitors while changing its landscape seasonally. The best time to visit the place will be autumn as trees with colorful leaves surround the waterfall.

Lies in the northern part of Ibaraki Prefecture, Fukuroda Falls has been a famous tourist spot, especially favorite among people living in greater Tokyo area. This waterfall is known as one of the most major three waterfalls in Japan; Nachi Falls (in Wakayama), Kegon Falls (in Nikko, Tochigi), and Fukuroda Falls in Ibaraki.

Fukuroda Falls, a 120ｍ-heigh and 73m-width waterfall, is a former volcano formed by submarine volcanic eruptions over 15 million years ago. The rainwater has come down and gathered into one place between the mountains over time, and then the running water has created the lava-rock, four-staged slope there. 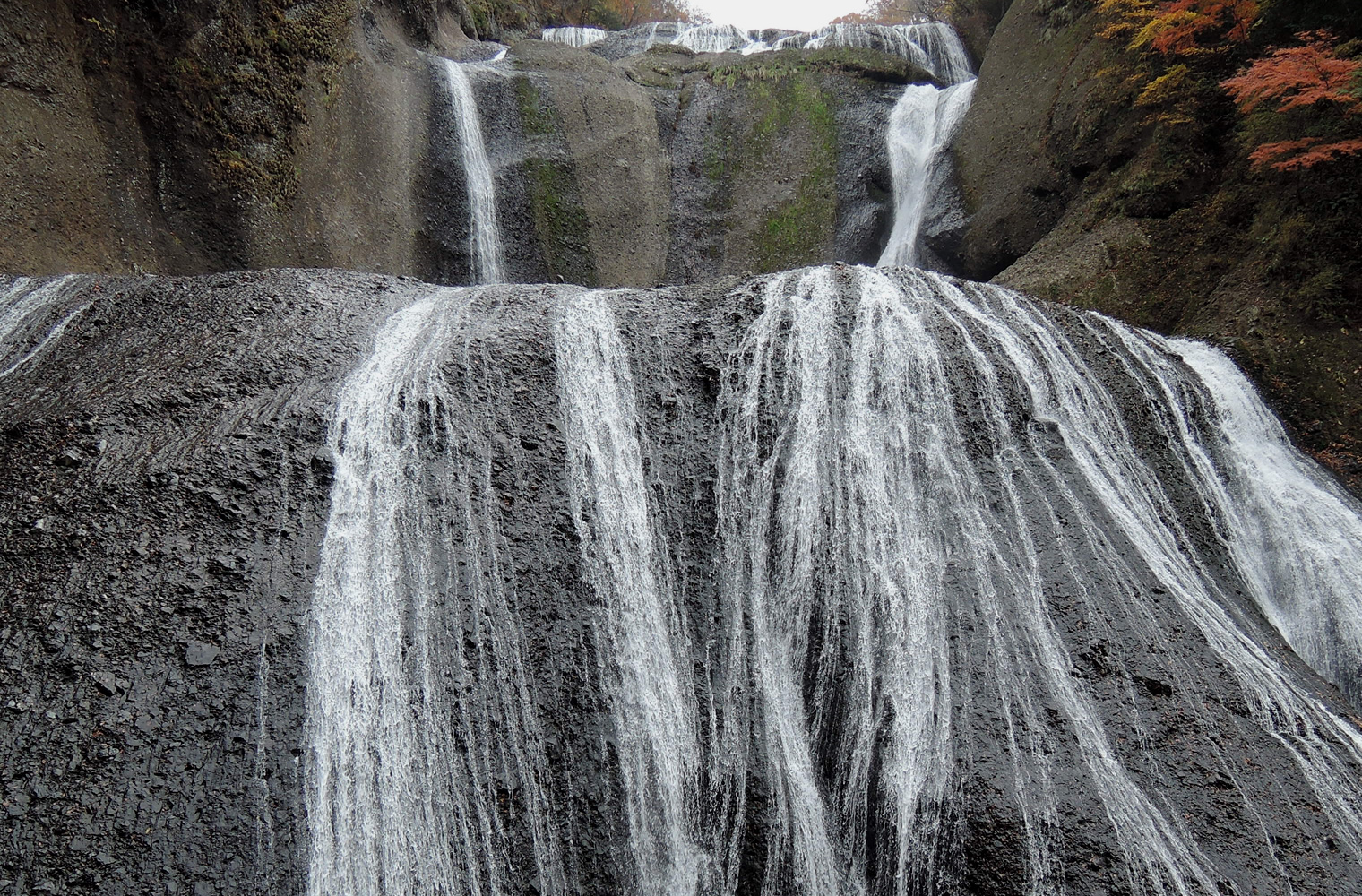 Many tourists repeatedly visit the falls

Since the water running down the waterfalls drastically varies depending on rainfall in the area, people who have seen the waterfalls tend to have a different impression; some say "It was stunning and powerful! " and other say "It was so elegant, looked like silk string drapes". The charm of the waterfalls also differs by its setting, seasonally changes against a backdrop of "colors"; Fresh green in spring, rainy green in summer, red and yellow in autumn, and crystal white in winter - this is a reason why Fukuroda Falls is called Yodo-no-taki, meaning " the waterfall to see for four times". (It also comes from its four-staged form) 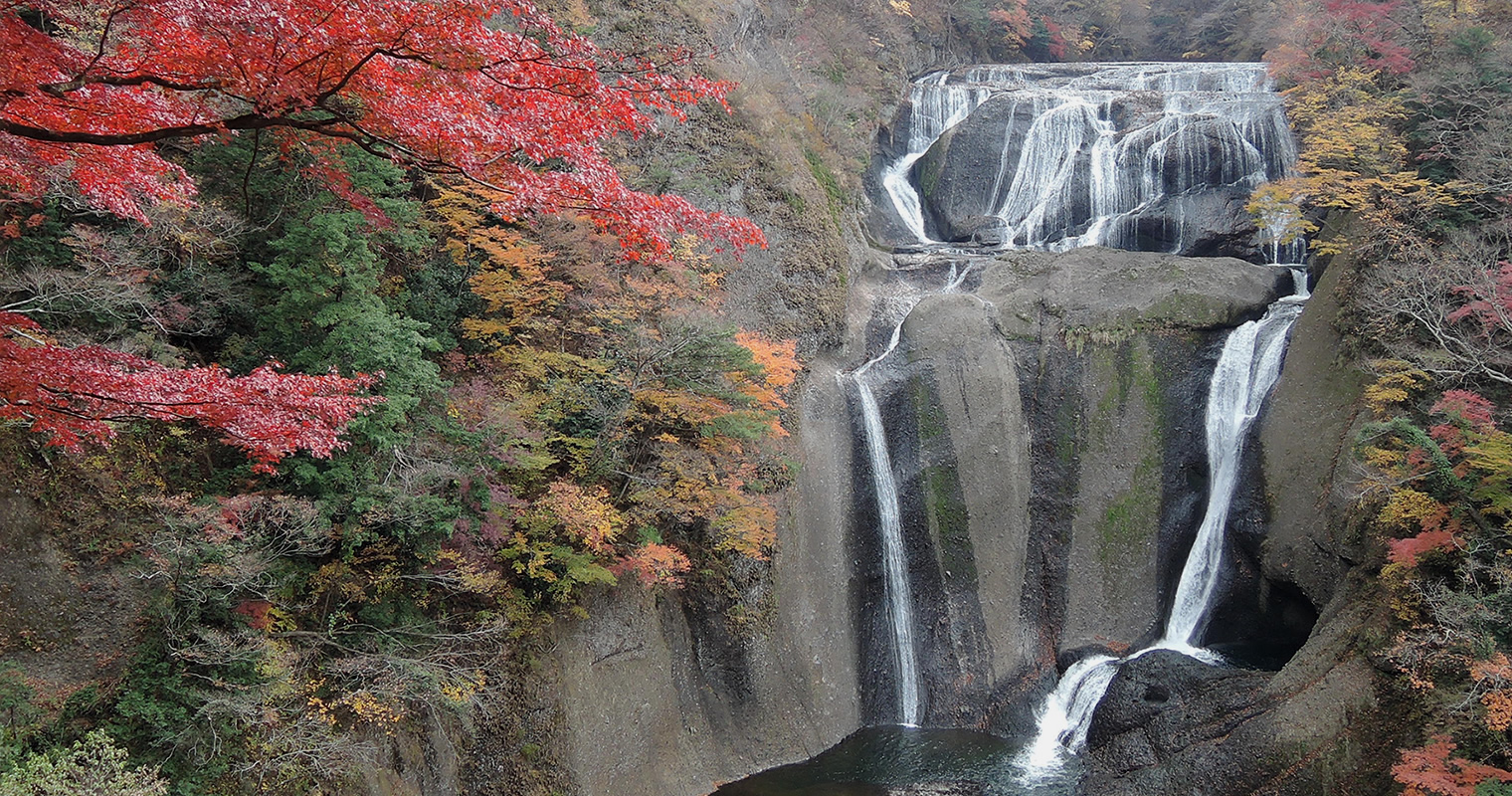 The viewing area for Fukuroda Falls has 3-stage viewing decks where visitors can enjoy the majestic view from different angles. Buying a ticket (300 JPY) at the entrance and going through a 276m-long passage tunnel, you will see the elevator leading to the decks on the upper floor reachable only by elevator. Getting up to the floor, you can go down/up the stairs to reach the decks on different levels.

On the way to the elevator in the tunnel, you will see another viewing area where you can reach on the way back from other decks. There is also a path to a small bridge and walking trail, allowing you to return without going through the dark tunnel again.

Autumn is the best visiting time to visit the falls

The best time to visit Fukuroda Waterfall is autumn, in other words, autumn is the busiest time. The viewing area will be packed with tourists and there will be a long line of people waiting for the elevator to take. Also, the road leading to the falls will be congested with cars and buses. Getting there in the morning to avoid crowds is suggested. The viewing area opens at 8:00 AM (from May to October) / 9:00 AM (from November to April).

Getting Fukuroda Falls by train from Tokyo (Ueno Station)

From Fukuroda Station, take a bus and get off at Takimoto 滝本. (10min ride) The bus runs every one hour or so.
Fukuroda Falls is about 10 minutes on foot from the Takimoto bus stop.

Walking from Fukuroda Station to the falls is also an option. There is a walking route along the road between there, takes about 40 minutes. If you visit the falls in autumn, walking from the station will allow you to avoid the busy traffic as well as to enjoy a hike in the countryside.