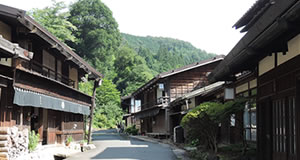 The Nakasendo Way is a route that connects Tokyo and Kyoto, has developed about 400 years ago. The Kisoji road near the Central Japan Alps is a part of the Nakasendo Way, noted for the beautiful old townscape of Japan depicted in Ukiyo-e wood prints by the master artist Utagawa Hiroshige. Taking a Shinkansen bullet train is a quick way to travel between Kyoto and Tokyo, but why not go a long way and take the inland mountain route to explore vestiges of the old Japan?

The Nakasendo Way has 69 Post-Stations, 12 of them are on the Kisoji road.

The Nakasendo Way 中山道 is a 500km road connecting Tokyo and Kyoto. Travelers hundreds of years ago used to take this route and walked all the way to Kyoto from the starting point Nihonbashi (near Tokyo. Station) in Tokyo. While it was impossible to walk all the way within days, travelers had to stop at villages to be served accommodation or meals, and these villages on the Nakasendo were developed as 69 post-stations being an oasis for travelers.

Though many of the 69 post-stations have transformed into a town or a city with modern buildings now, some stations deep in the mountains were left behind with old buildings, fortunately, and the nostalgic townscape has been restored there. The restored 12 post-stations are situated on the Nakasendo Way between Shiojiri and Nagoya, where the Kisoji road 木曽路 is. 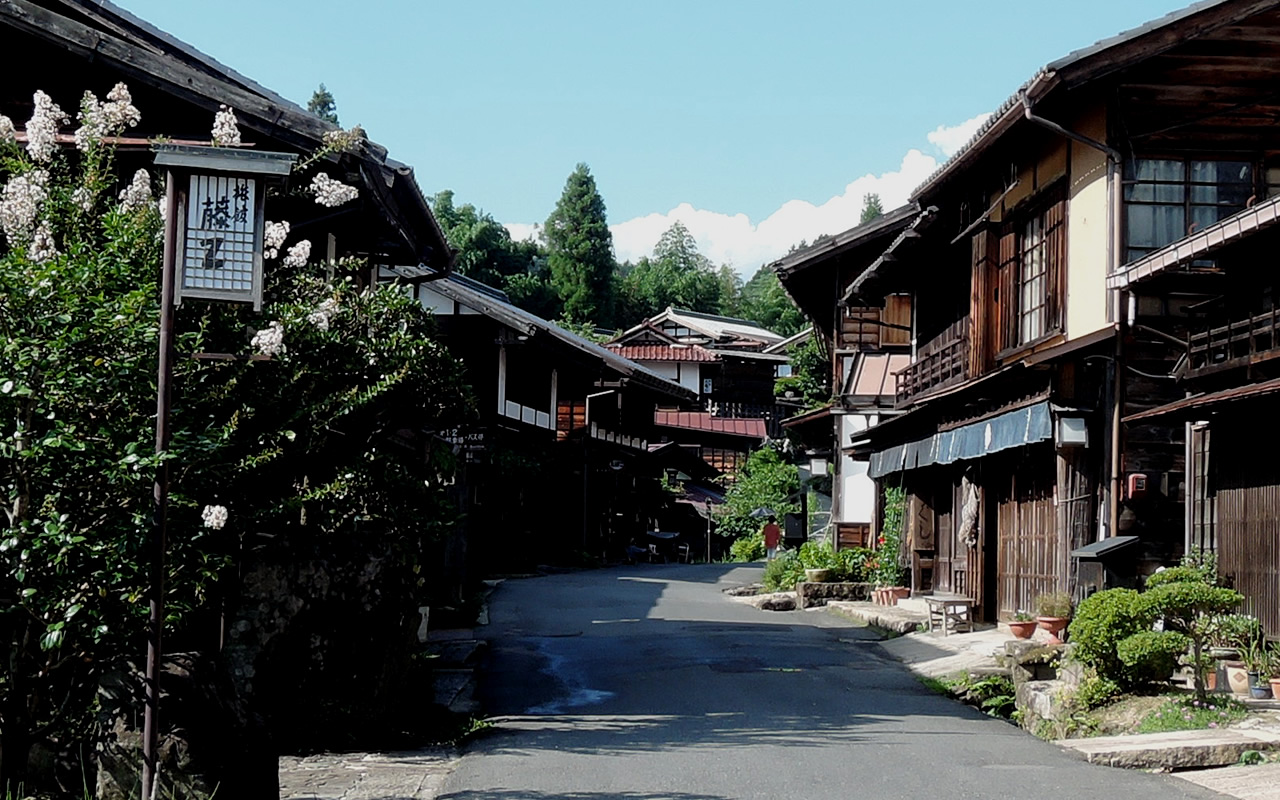 The Chuo Honsen(Main) Line runs along the Kisoji area

Most part of the Nakasendo Way itself has remained to this day, some parts have even developed as a national road. Also, the Chuo Honsen Line linking Tokyo to Nagoya runs along the Kisoji road on the Nakasendo Way. Taking the Tokaido Shinkansen Line along the coastline is a much quicker way of transport between Tokyo and Nagoya, however, taking the Chuo Honsen Line allows you to visit the Kisoji area to discover good old Japan, different from what you see in Kyoto or those famous tourist spots. 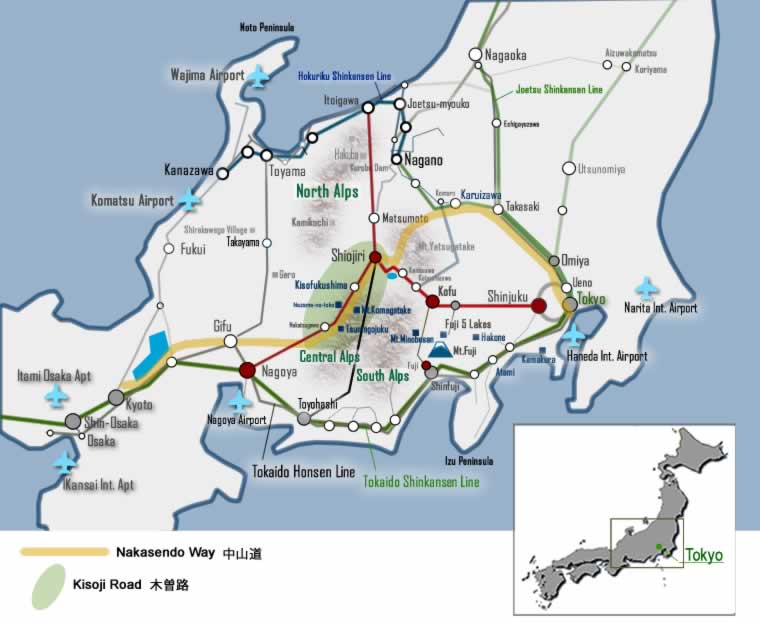 The three of the 12 post-stations; Narai-juku 奈良井宿, Tsumago-juku 妻籠宿 and Magome-juku 馬籠塾 are a well noted sightseeing spot for its picturesque scenery. There are tourist information offices and accommodations there. The accommodations are Japanese inns in traditional style. 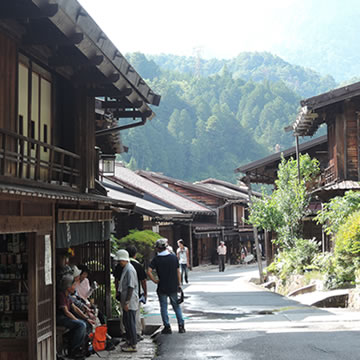 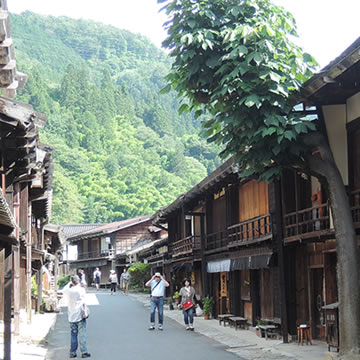 To reach the Kisoji area from Tokyo, take the Chuo Honsen Line (Express Train Azusa あずさ) from JR Shinjuku Station 新宿. One thing you need to know is that you are to change trains at JR Shiojiri Station 塩尻 while the train system on the Chuo Honsen Line is operated by two different railway companies, JR East(Tokyo-Shiojiri) and JR Central Japan (Nagoya-Shiojiri). It takes about 2 hours and a half from Shinjuku to Shiojiri Station.

From Shiojiri Station take a local or an express train "Wideview Shinano ワイドビューしなの" bound for Nagoya which stops at stations on the Kisoji area, depending on your travel destination. The local train runs a few times a day (every 2 hours or so). The express train stops only at Kiso Fukushima 木曽福島 and Nakatsugawa Station 中津川 (some of the fast trains stop at Nagiso station)

Getting there from Nagoya

Getting to Narai-juku from Tokyo

From JR Shinjuku Station, take the Chuo Honsen Line (Exp.Azusa) to Shiojiri 塩尻. From Shiojiri take a local train to Narai Station 奈良井駅. The Narai-juku town is reachable with a 3-minute walk from the station. The total travel time is about 3 hr 15 min and the fare is 7330 JP Yen)
Note that the fast/express train does not stop at Narai Station.

Narai-juku is also reachable from Tokyo by bus. Take a Tkeio bus from Shinjuku Express Way Bus Terminal. It takes about 4 hours, the fare is 4200 JP Yen.

From JR Shinjuku Station take the Chuo Honsen Line (Exp. Azusa) to Shiojiri. From Shiojiri take a local train to Nagio Station 南木曽駅, the nearest station to reach Tsumago-juku. The travel time is about 4 hours. The fare will be somewhere between 7,980 and 10,320 JP Yen. From Nagiso Station take a bus going to Tsumago-juku. It is a 10-min bus ride, about 4km. (A gentle uphill.)
Note: Some of the fast train including Wideview Shinano stop at Nagiso Station.

Getting to Magome-juku from Tokyo

From JR Shinjuku Station take the Chuo Honsen Line (Ex. Azusa) to Shiojiri. From Shiojiri take a train (Exp. Wideview Shinano) and get off at Nakatsugawa Station 中津川駅, the nearest station to reach Magome-juku. All the fast trains including Wideview Shinano stop at Nakatsugawa Station. The total travel time will be 4 or 5 hours and the fare will be between 8,300 and 10,000 JP Yen. From Nakatsugawa station take a bus to Magome-juku. (a 25-min bus ride). The bus runs every one hour or so, and the fare is 580 JP Yen.

Magome-juku is also reachable from Tokyo by bus. Take a JR Tokai bus from Shinjuku Express Way Bus Terminal (Near Shinjuku Station South Exit). It takes about 4 hr 45 min. The fare will be somewhere around 4,700 JP Yen.

It is about 10km between Tsumago-juku and Magome-juku. A bus system is served between the towns. 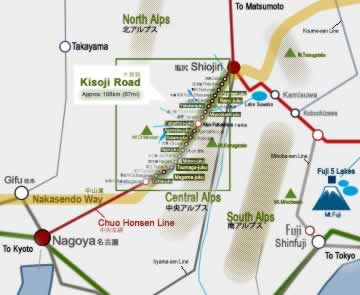 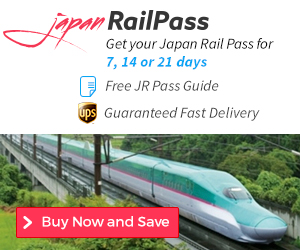