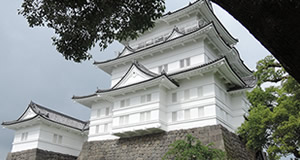 Odawara 小田原 is a city known for the gateway to Hakone, the traditional Onsen Resort area. Many tourists use Odawara Station to take a bus or a train heading to Hakone. However, Odawara is not a place just to pass through on transit. Odawara is actually a castle-town having a glorious history back to Samurai era over 550 years ago. Don’t miss out on visiting Odawara where you will find things to see and do, including Samurai and Ninja costuming.

The castle town near Hakone Resorts, within easy access from Tokyo

Lies about 80 Km away from Tokyo, Odawara is a former post town on the Tokaido Way connecting Kyoto and Tokyo, the route where the Tokaido Shinkansen Bullet Train currently runs. Odawara is now being a transit point to reach Hakone both by bus and train.

Odawara originally developed as a castle town that used to be most flourished with the Hojo clan during the Samurai’s warring states period in the 16th century. The symbol of the glory days is the Odawara Castle 小田原城, had been taken over by several Samurai lords.

Odawara Castle is actually one of the easiest-to-access-from-Tokyo castles and is also located within walking distance from Odawara Station. 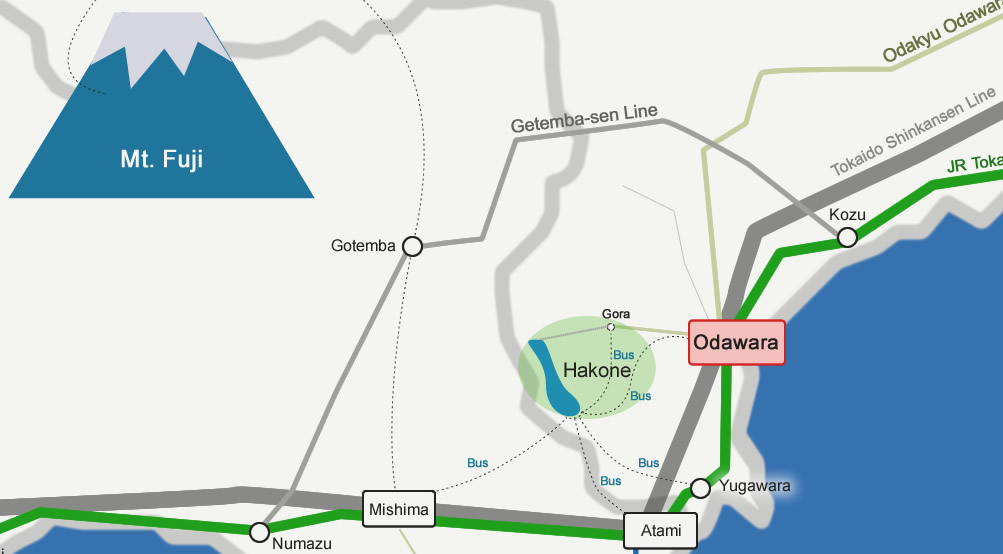 Getting to Odawara Castle, the symbol of Odawara City

The shortest way to reach Odawara Castle from Odawara Station is to leave the station from the East Exit and go up the street on the right side leading to the back entrance (North Entrance) of the castle park, it takes about 10 minutes on foot. From the station to the front entrance it will take about 20 minutes. 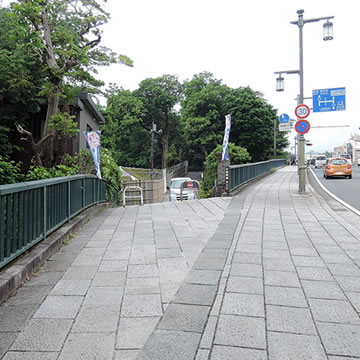 The approach to Odawara Castle from the back entrance. 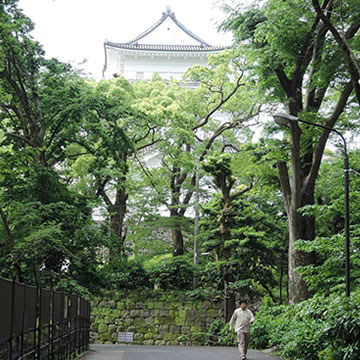 Going up a slope leading to the castle

Odawara Castle keep tower stands on a hill top and the surrounding area has been a castle park. Though the present Odawara Castle is a concrete building reconstructed in 1960, the appearance is almost the same as the former wooden building that was renovated by the Inaba clan, one of the castellans, the earthquake in 1633 damaged the original castle.

The castle keep tower has been a museum telling the history of Odawara Castle, has a collection of artifacts, armor and weapons. The wooden place on the top floor has been recreated for its original look by the recent repair work done in May 2016.

The museum shop provides items all related to Samurai or Ninja - Ninja T-shirts, Ninja Socks, and Samurai crest key rings, it is fun to look for something unique sold only at the shop. 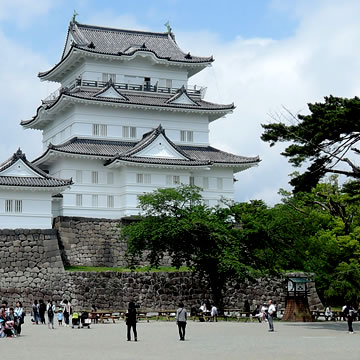 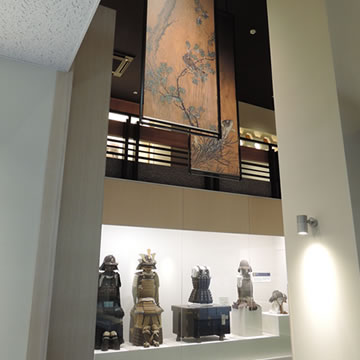 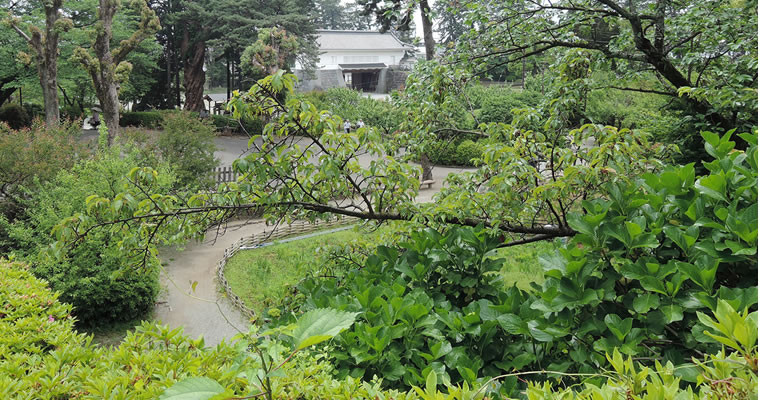 Odawara Castle Park is a good place for strolling.

Samurai, Ninja and Princess Costuming is another attraction of Odawara Castle

Tokiwagi Gate 常盤木門, the building in front of the castle keep tower, is an information center with a small museum displaying Samurai armor and weapons (Admission is free). Also, there is a costume rental office in Tokiwagi Gate so people can hire Samurai, Ninja and Princess costumes. The costume rental fee is only 300 JP Yen for adult and 200 JP Yen for a child at 12 years old or younger. (Open 9:30 - 3:30PM) 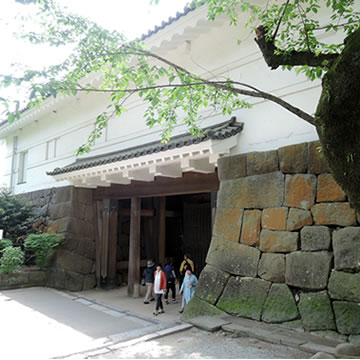 The Tokiwagimon Gate building in front of the castle keep tower 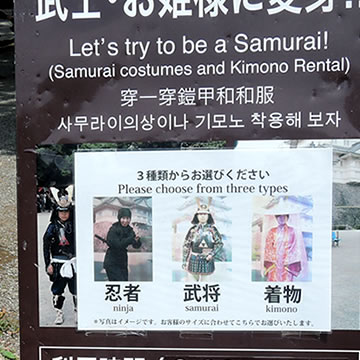 Odawara is a town beloved by artists and celebrities a century ago.

The town area has a long history not only as a castle town where Samurai and Ninja lived in but also as the place where numerous artists and wealthy families had lived about hundred years ago. Some of their residences and gardens have been preserved and now opened to the public as a museum.

The town area in Odawara has a fishery harbour and beaches
Odawara is known for its fish market handling freshly caught seafood. In the area around Odawara Station, many restaurants are offering traditional seafood dishes. The Fish Market at the port has the place "Osakana Center" where seafood restaurants and shops gather, offering authentic, fresh seafood such as Sushi Bowls and BBQ. One hitch expected is that you need to order in Japanese, though, it is notable that the dishes are served at very reasonable prices. The fish market is located at the Odawara fishery harbor in the west of the town, is about 20 minutes walk from the front entrance of Odawara Castle Park. Those who don’t want to walk much may take a train and get off at Hayakawa Station that is only a few minutes walk from the fish market. 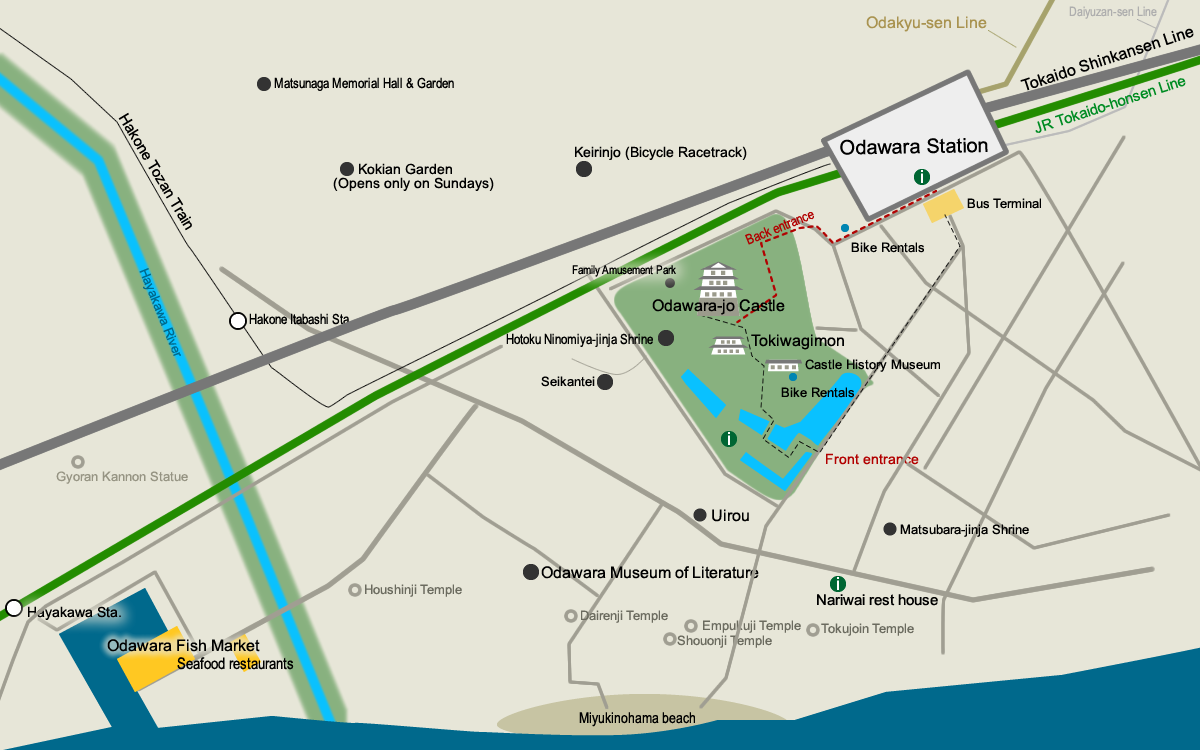 Getting to Odawara from Tokyo

From Shinjuku by Odakyu Line
From Odakyu Railway Shinjuku Station 小田急新宿駅, take the Odakyu-sen train bound for Odawara and get off at Odawara Station
Travel time : 1hr 35min by Kyuko Express train, 2hr 14min by regular train
Fare: 880 JP Yen
As this is a commuting train, it gets extremely crowded during rush hours and you may hardly find an empty seat. Anyway, this is the cheapest way to reach Odawara from Tokyo by train.

From Shinjuku by Odakyu Line "Romancecar"
From Odakyu Railway Shinjuku Station, take the Odakyu-sen “Romancecar” train bound for Odawara.
Travel time : 1hr 8min
Fare: 1770 JP Yen
Romancecar is a train with all reserved seating. The fare is almost double of the regular fare, but you can sit back and relax, without having to worry about no empty seats available. Booking is required

From Tokyo Station by JR Railway
From Tokyo Station, take a train on the Tokaido-honsen Line bound for Atami and get off at Odawara Station.
Travel time : 1hr 23min.
Fare: 1490 JP Yen
Tokaido-honsen Line is also a commuting train and it gets extremely crowded during rush hours. With an additional fare of 980 JP Yen, you can get a seat on a green car (first class car). The Tokaido-honsen train can be taken from Ueno Station, Shinbashi Station and Shinagawa Station and Yokohama Station. JR Rail Pass is valid. 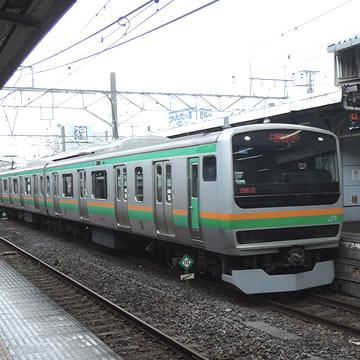 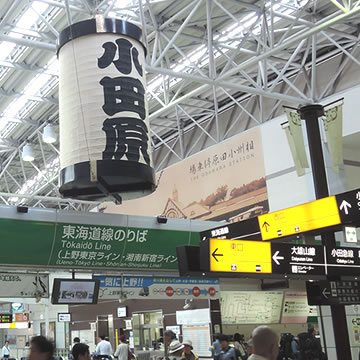