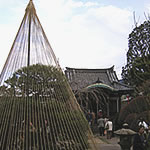 Yanaka, an old town in Tokyo

The Yanaka area 谷中 is a historical part of Tokyo, developed as a temple town in the Edo period (1603-1867). Prominent temples like the Tenouji and the Kaneiji were founded and still exist in the area. In the past people living all over the Edo(the former name of Tokyo) used to visit Yanaka for worship and for sightseeing.

Take the Keisei Line from Narita Airport and get off at the Nippori station.

Using the Keisei line, there are 2 trains available; the Skyliner and the other is called Keisei Honsen Express. Skyliner is faster than the Express, but the fare is about 1400 yen($12US) higher than the Express. It takes about 60 minutes from Narita to Nippori.

The Keisei Honsen Express (Tokkyu) is one of the cheapest ways to go to central Tokyo from Narita Airport. It takes about 1 hour and 15 minutes from Narita Airport to Nippori Station. However, it is crowded during rush hours in the morning and at night, as it is a commuter train.

From Asakusa to Ueno
By Ginza Subway Line, it takes approximately 6 minutes.
* Loop Bus "Megurin ( http://www.city.taito.lg.jp/index/kurashi/kotsu/megurin/index.html Japanese)
You can also take a loop bus called Megurin, that travels around the Asakusa and Ueno area. The fare is only 100 Yen for a ride, and it is convenient.