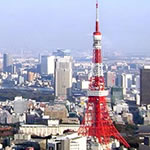 Having scenic views from the top of high-rise buildings is one of the best tourist attractions in Tokyo. It is amazing to see a panoramic view of the big city, jam-packed with miniature-like houses and buildings where 13 million people are living. The nightscape is fantastic too.

Winter is the best season to enjoy the panoramic views

In winter, we don’t have much rain and the humidity is low, the sky is so clear that it allows you to overlook the city into the far distance. In all seasons, it allows you to see Mount Fuji from Tokyo on clear days. However, Mount Fuji can most clearly be seen in winter, as well as looking beautiful as it is covered with white snow.

Observation decks atop famous, high-rise buildings, such as Tokyo Tower, Sky Tree, Sunshine 60, and Yokohama Landmark Tower (in Yokohama), require an entrance fee. However, there are also the ones allowing you to enjoy viewing for free, as listed below.

Nearby Attractions
- Shopping and entertainment district in the east area of the Shinjuku Station
- Shinjuku Gyoen National Garden
http://www.env.go.jp/garden/shinjukugyoen/english/index.html

The Bunkyo Civic Center is the ward office building of Bunkyo-ku, Tokyo. This building is not so high, but it allows you to have a wide view as there is no other high-rise building nearby. On the 25F, there is also a restaurant.

Getting there
1 min. walk from Kasuga Subway Station on the Toei Mita or Oedo Line.
Google Maps - Bunkyo Civic Center

The Hokutopia is the ward office building of Kita-ku, Tokyo. This building is also not so high, but it allows you to have a wide view as there is no other high building around the district. The Asukayama Park at the foot of the building is covered with Sakura flowers in spring.

A commercial building located in Sangenjaya, Setagaya-ku, Tokyo. On the 26th floor, there is a restaurant and a lobby where you can have a superb night view.

Getting there
1 min. from Sangenjaya Station on the Setagaya-sen Line.
Google Maps - Carrot Tower

This is the ward office building of Sumida-ku, Tokyo. Visitors are allowed to go up to the 14th floor where you will have the best view of Tokyo Sky Tree, the new symbol of Tokyo, towering in front of you. There is no observation deck, instead, you are to have a view from windows near the elevator hall.