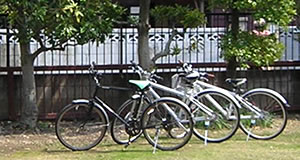 A bicycle is such a convenient vehicle indeed. It is eco-friendly and helps saving money on train or bus fares. Although there are some hilly towns within the 23 wards of Tokyo, such as Shibuya, Roppongi, Shinjuku (Kagurazaka), Kanda, and Yanaka, most of the 23-ward areas, especially in the eastern areas, are the flat land where people can enjoy cycling with no sweat.

What to be aware of cycling in Tokyo

Recently, cycling is getting so popular in Tokyo, for communing, for sightseeing, and as a sport. Although Jitensha (自転車:Bicycle）ride has been popular among Japanese more than a half-century, the real popularity has just increased around 2005, as young Japanese started to take bicycles as a cool vehicle.

The problem is that bicycles had been recognized as a vehicle for short-distance traveling, for going to a nearby super market etc., bike lanes have not been well developed in Tokyo in spite of this recent popularity.

It often forces bike riders to travel along with cars on busy roads or to travel on pedestrians walking paths while barely avoiding bumping into people walking by. So, you are not allowed to travel very fast in the situation and need to be careful about bicycle accidents which are drastically increasing these days.

River Banks – The best places to enjoy cycling in Tokyo

In Tokyo, there are several river banks where cycling routes are provided. No traffic jams, No traffic lights to wait, and the blue sky and the green ground are what you will see there. River banks are a place to relax for Tokyo residents. 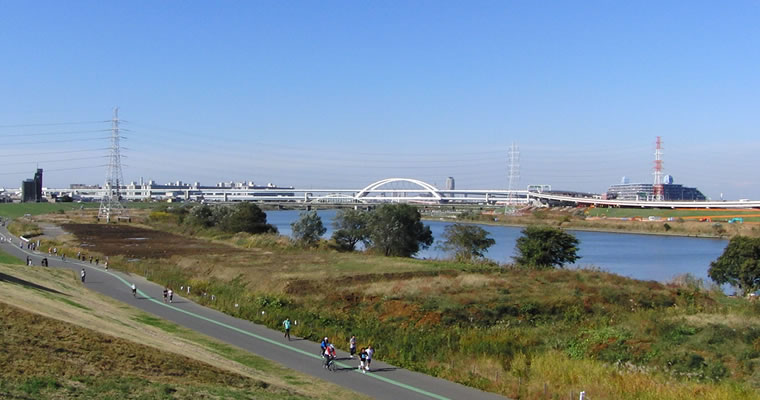 The Tamagawa River is one of the cleanest rivers in Tokyo, runs through Ome town of Tokyo to Kawasaki of Kanagawa prefecture.

A 173km-long river runs from Chichibu mountains in Saitama prefecture to Tokyo Bay.
The part of the Arakawa river running in Tokyo area is actually a 22km-long manmade river called Arakawa Housuiro (=flood control channel), completed in 1930 after 17-year construction. Cycling roads are basically provided along the Arakawa Housuiro.On a clear day, bike riders will see Mt.Fuji from there.

Edogawa River is known for the location of the film “Otoko wa Tsurai yo”, one of the most popular Japanese movie series. The story of the movie is set in Shibatama, an old town with a friendly atmosphere lies on the side of the Edogawa River.